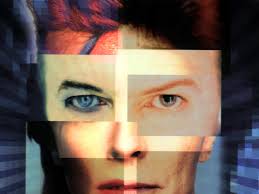 25 studio albums, including Blackstar, released in 2016*

Bowie’s luxuriant artistic career as songwriter, singer, musician,record producer, actor and painter continued with a series of colossal hits in the 1980s: “Ashes to Ashes” from the album Scary Monsters (and Super Creeps) (1980), “Under Pressure” a collaboration with Glam Rock music artists Queen in 1981, and “Let’s Dance” in 1983.

The decade of the Eighties saw Bowie and his first wife Angela divorce. It was also the decade of the music trend called “New Romanticism”, originating in Berlin, Germany.Bowie appeared in the Broadway play The Elephant Man in 1980, as well as role of supporting actor in the film Merry Christmas, Mr.Lawrence. (http://www.musicianguide.com) The artist was also given the lead role in BBC Television Bertolt Brecht‘s play Baal.

The commercial success of “Let’s Dance” and its legendary co-production by Nile Rodgers of Chic was followed by lesser hits “Modern Love”, “China Girl”, “Blue Jean”, and “Dancing in the Street” with Mick Jagger. The albums of this period were as follows: Let’s Dance (1983), Tonight (1984), Never Let Me Down (1987). David also had roles in ten films during this rich artistic time period.

The decade of the 1990s has been considered the artist’s “Electronic Period” (see Wikipedia) with heavy use of electronic instruments and re-uniting with Eno as well as working again with Nile Rodgers. NIN  (Nine Inch Nails)co-produced the hit single by Bowie “I’m Afraid of Americans”.  Bowie was inducted into the Rock and Roll Hall of Fame in 1996; in 1997, the singer celebrated his 50th birthday at Madison Square Garden with Lou Reed, Dave Grohl (of Foo Fighters), Robert Smith of The Cure, and others.

Regarding his sexuality, Bowie declared himself gay in a 1972 issue of Melody Maker. In 1976, he told Playboy “Its true. I am a bisexual. But I can’t deny that I’ve used that fact very well.” Then in 1983, he gave an interview to Rolling Stone in which he disavowed all that stating the initial statements were “the biggest mistake I ever made; I was always a closet heterosexual.”

David Bowie’s influence and music contribute to be felt around the globe, by the outpouring of fan support everywhere and tributes by those of prominence in the music, art,fashion, and film worlds. Bowie’s record company gave the definitive statement years ago by saying “There is old wave, there is new wave, and then there is Bowie.” Couldn’t agree more. David was way ahead of his time.

View “Heroes” by David Bowie—one of our enduring heroes forever.