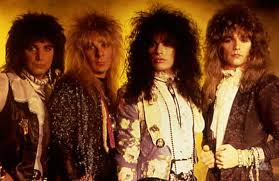 Britny Fox were an American glam metal band from Philadelphia, Pennsylvania who are best known for their hits “Girlschool” and “Long Way to Love.” The band’s name came from lead vocalist “Dizzy” Dean Davidson, who commissioned the name “Britny Fox” after a Welsh ancestor of his. The band formed in 1986 and also featured Billy Childs on bass, Michael Kelly Smith on lead guitar, and Tony Destra on drums. {For this and more information see Wikipedia.}  Both Michael Smith and Tony Destra had had prior stints with glam rockers Cinderella prior to the formation of Britny Fox.  It was their connections to Cinderella that helped Britny Fox secure a recording contract. (CBS Records) However, their future prospects dimmed somewhat due to the untimely death of Tony Destra in a car accident. His replacement was Johnny Dee, formerly of the band Waysted. B.Fox released two demos, one in 1986 (“In America”) and the other in 1987 (“Rock is Gonna Fight”); this then resulted in the band’s eminent debut album, of their same name, entitled simply Britny Fox.

Britny Fox was one of the most striking debut albums in 1988, selling more than one million records, and bringing many fans to their tour with Poison and Warrant. In 1988, Britny Fox also won Metal Edge magazine’s award for “Best New Band”. After the release of the band’s second album Boys in Heat, Davidson departed to start another band, Blackeyed Susan. Britny Fox’ third album, Bite Down Hard, was less of a grand slam due to the overall decline of glam metal in the late 80s for the grunge rock movement that was evolving at the time.

The band recorded one final studio album Springboard Motorshark in 2003 after the original band reunited in 2000. They toured the US and Europe in 2007 and 2008. The band separated once more, and in spite of Dean Davidson’s pursuit to bring the band back together in 2010, the endeavor failed.

For those of you who cannot get enough of Britny Fox, read Tommy Paris’ interview on Sleazeroxx. [Tommy Paris was the lead singer who replaced Dean Davidson during the 1990s and was lead vocalist during the 2007 & 2008 tours]. Here is the link: http://www.sleazeroxx.com/interviews/paris.shtml