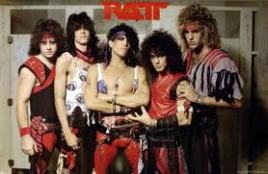 Ratt is an American metal band that had commercial success in the 80s and are recognized as being very influential in the Los Angeles glam metal scene. They are best known for their hits “Round and Round”, “Lay It Down”, “Way Cool Junior”, “Lovin’ You’s a Dirty Job”. (See Wikipedia for this and more). The band continues to record and tour today. For the latest news about this, see http://www. therattpack.com.  According to the band’s bio on this site, Ratt was signed to Atlantic records in 1984 and their record sales have gone 3x Platinum, “selling in excess of 15 million albums in the US alone”.  The original band members consisted of: Warren DeMartini, Stephen Pearcy, Bobby Blotzer, Robbin Crosby, and Juan Croucier.

For the complete page of RATT album covers/discography go to:

The inception of this great glam metal band started in 1976 with a band called Mickey Ratt which was formed by founding member and vocalist Stephen Pearcy. There were several changes in their lineup during this time period and throughout the band’s history.

(For complete info on this, see Wikipedia.)  The band named Mickey Ratt moved to Los Angeles in 1980 to increase their chances of landing a recording contract, and Mickey Ratt recorded two singles “Dr.Rock” and “Drivin’ on E” during this phase of the band’s genesis, and records were given out to fans at their early shows in the L.A. club scene.

In 1981, the band’s name was shortened to RATT. Guitarist Warren DeMartini joined in 1982 at the age of 18, having made a life-changing decision as to whether to stay in community college or throw his lot in with what was then an unknown group. More crucial additions during this time were Bobby Blotzer on drums (formerly with Vic Vergeat) and Juan Croucier on bass (formerly with Dokken). In 1983, Ratt signed with independent L.A. label Time Coast records and released the first Ratt EP in the U.S. After the EP (Extended Play) was well-received, the band was signed to Atlantic records. Ratt band members then started working on material for their first album, Out of the Cellar.

RATT signed with Atlantic Records, writing and recording the band’s first full-length album, Out of the Cellar –which generated the crew’s monster hit “Round and Round”. For those fans out there who remember the 80s rock n roll radio, Ratt’s “Round and Round” was constantly on the radio, defining 80s hair and heavy metal,as well as the video in heavy rotation with Milton Berle’s “Uncle Miltie” character in the rock video, and guitarists crashing through the ceiling onto a dinner party, complete with rats under glass. This first album is regarded as Ratt’s paramount work. Out of the Cellar was a mammouth hit, going platinum many times over in the USA and Far East.

RATT’s next release Dancing Undercover featured “Body Talk”, “Dance” and “Slip of the Lip”. Throughout 1987 RATT toured with Poison.  Reach for the Sky was released in 1988 and reached #17 on Billboard’s Hot 100, achieving platinum status with “Way Cool Junior” and “I Want a Woman”. RATT toured Tokyo that year with Kingdom Come, Bon Jovi, and Britny Fox.

RATT’s fifth album Detonator was released in 1990 and featured tracks “Shame Shame Shame” and “Lovin You’s a Dirty Job”. Jon Bon Jovi joined as background vocalist on “Heads I Win, Tails You Lose”. During the Japanese leg of Detonator tour guitarist Robbin Crosby’s substance abuse problem led to inconsistent playing onstage, and during one memorable performance, Crosby did not switch out guitars with his guitar technician for songs that required different tuning, and was subsequently out of tune with the band on the next several songs. The culmination of this was that it was Crosby’s last gig with the band, and he checked himself into a rehab facility after the tour ended. At the end of 1991, RATT released the song “Nobody Rides for Free”, signalling a change in the band; 1991 was the last year that the original five members of the band RATT played or recorded together.

RATT to this day is still an influential band in the glam metal scene. The next upcoming gig for RATT is the Monsters of Rock

cruise departing Miami, Florida March 29th, 2014. According to RATT’s website, http://www. therattpack.com, “The year 2010 saw RATT sign to RoandRunner for the release of Infestation. Their 10th studio album will be released in 2014. Lead singer Stephen Pearcy is quoted as saying “Our music is like it was in the beginning..We’re going to celebrate (30) years in 2014 with a new record and world tour to keep Ratt N Roll alive.” The current band members are: Pearcy, DeMartini, Croucier, Blotzer, and Carlos Cavazo (formerly of Quiet Riot) replacing the late Robbin Crosby. Crosby died on June 6, 2002 of a heroin overdose. He was 42 years old.