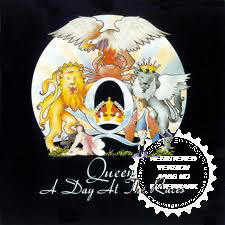 Queen was a British rock band formed in London in 1971, consisting of Freddie Mercury (lead singer), Brian May (guitar), John Deacon (bass guitar), and Roger Taylor(drums). Before joining Queen, Brian May and Roger Taylor had been playing in a band called Smile. According to Wikipedia, Freddie Mercury (known then by his birth name of Farrokh Bulsara) was a fan of Smile, and encouraged them to experiment with a more elaborate stage presentation and musical style. Queen is generally known for their camp, audacious style; their rich and diversely textured vocal harmonies; and their descriptive, poetic and sometimes haunting lyrics. Mercury then joined the band and changed the name to Queen, while also taking the stage name Mercury. In 1973, Queen signed their first recording contract with EMI, and this was also the year of their first major tour. In 1974, Queen.

The roots to the formation Queen date back to 1968, when guitarist Brian May was a student at London’s Imperial College along with bassist Tim Staffel, and the two decided to form a rock band. May placed an ad on the college notice board for a drummer, and Roger Taylor, who was a dental student at the time, auditioned and got the job in the group called Smile. While attending Ealing Art College, Tim Staffel became friends with Farroukh Bulsara (Freddie Mercury). Staffel subsequently went on to join another band, which did not achieve any success.  Bulsara became a big fan of Smile, and after joining the group, changed the name to Queen.  Meanwhile, Queen went through a number of bass guitar players before they came upon John Deacon, and once Deacon joined, the rock group was ready to start rehearsing for their first album. Bulsara adopted the English name Freddie and took the stage name Mercury, named after a line in one of Queen’s early songs My Fairy King that says “Mother Mercury, look what they’ve done to me.”

At first after Queen recorded their demo tape of songs, no record companies were interested.  In 1973, Queen signed their first recording contract with EMI, and this was also the year of their first major tour. In 1974, Queen released Queen II, cited as one of the greatest Glam Rock albums of all time. Queen enjoyed good success with Queen II (1974), but it was with the release of Sheer Heart Attack (1974) and A Night at the Opera (1975) where the band gained international success. After the band played six consecutive nights at New York’s Uris Theatre in 1974, Brian May collapsed and was diagnosed as having hepatitis, and this event may have inspired the title of Sheer Heart Attack.  It was the album A Night at the Opera that contained Queen’s massive hit,” Bohemian Rhapsody,” which stayed on the UK charts at number one for 9 weeks. Their 1977 album News of the World contained two of their most recognizable songs, “We Will Rock You” and “We Are the Champions” -both staples of sports arenas everywhere.

The single “Killer Queen” reached #2 on the British charts and became Queen’s first US hit. It combines camp, vaudeville, Brian May’s guitar virtuosity. An important comment must be made about the outstanding and at times absolutely astonishing guitar skills exhibited by Brian May. If you listen to “Keep Yourself Alive” or “Stone Cold Crazy” the guitar playing is truly amazing, and you wonder ‘how does he do it?!’ The high-speed rocker “Stone Cold Crazy” is technically classified as “speed metal”. A Night at the Opera is one of the most expensive albums ever produced, according to Wikipedia, and the title is taken from a famous Marx Brothers movie of the same name, and the accompanying music video is considered the first “true” music video.

In the late 1970s, Queen toured extensively, including a famous free concert in 1976 on London’s Hyde Park, as well as sold-out shows in New York’s Madison Square Garden and Earl’s Court, London. In 1978 and 1979, Queen literally toured most of the world, with the US and Canada in 1978, and Europe and Japan in 1979. The 1980s saw the release of the album The Game, with its hits “Crazy Little Thing Called Love” and “Another One Bites the Dust”. The album topped the Billboard 200 for five weeks. After attending a Queen concert in 1980, Michael Jackson suggested to Mercury backstage that they release “Another One Bites the Dust” as a single. In 1981, Queen travelled to South America and became the first rock band to play in Latin American stadiums with some of the largest concert crowds in South American history. In 1980, Queen collaborated with David Bowie on the single “Under Pressure” after Bowie happened to drop by the studio where Queen were recording. Later in 1981, Queen released the compilation Greatest Hits, which is the best-selling album in UK chart history, going 8x platinum in the United States and selling over 25 million copies worldwide.

The sentinel events in the history of the band were the Live Aid concert in Wembley Stadium July 1985 in front of a TV audience of 1.9 billion. The final tour by Queen with Freddie Mercury was in 1986. This was a pre-cursor to Freddie Mercury’s AIDS illness, which fans began to suspect due to Mercury’s deteriorating and gaunt appearance beginning in 1988. Mercury denied that he had AIDS until upon his deathbed (only 24 hours before he died on November 23, 1991), he read a prepared statement acknowledging the disease.

Queen most recently toured in 2005 with Paul Rodgers (formerly of Bad Company). See Queen’s website for current news. It is astonishing that Queen have several tribute bands that garner international audiences, although Queen themselves still tour and record. See Fan Club  http://www.queenworld.com or Brian May’s website http://www.brianmay.com.   {Editor’s note: many of the information in this blog came from Wikipedia.}